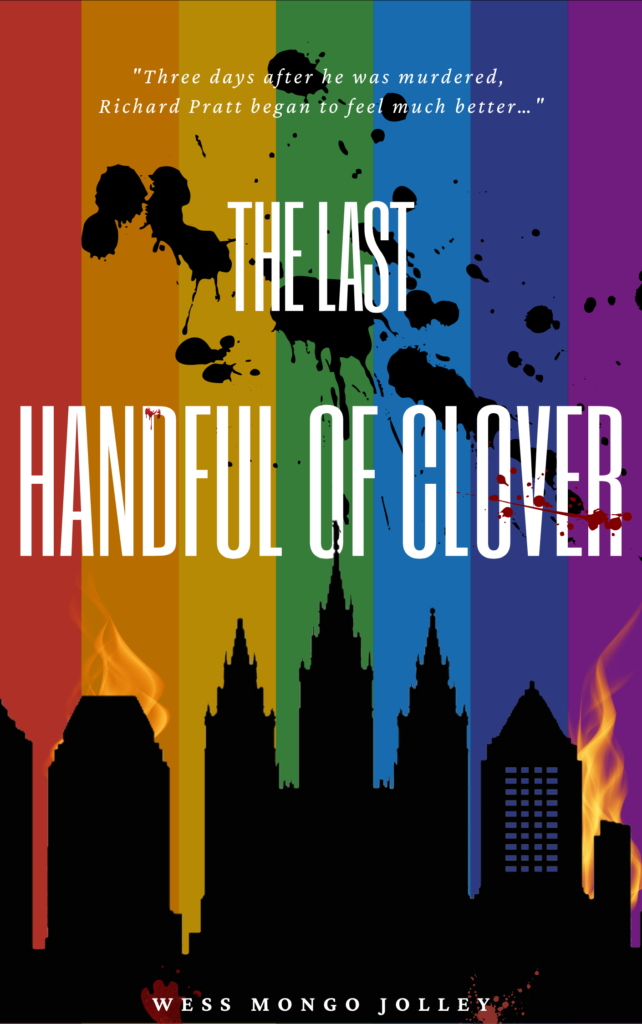 Three days after he was murdered, Richard Pratt began to feel much better…

A seemingly random act of violence propels Professor Richard Pratt into “The Hereafter.” It is a strange, muted, netherworld of the dead—a world in which he is forced to bear witness to the loss and suffering of the man he left behind, and to the rapid demise of the city he called home. And when the other denizens of his ghostly realm begin to enact a brutal revenge on the world of the living, it is only Richard Pratt that can save them.

With the help of a barefoot 15-year-old boy from the old West and an ancient Goshute wise woman, Richard Pratt sets out to save the man he loves, Salt Lake City, and his own wounded soul. Together they must face a ferocious enemy bent on the complete destruction of a great American city. An enemy with his fingers deep in Richard’s shameful past.

The Last Handful of Clover is a sweeping supernatural thriller about love, loss, regret, and redemption. It is a novel of terror, in which one man is called upon to face the sins of his past in order to save the future for the man he loves, and a city of over a million innocent souls.

Peopled by a cast of unforgettable characters, The Last Handful of Clover is an epic hero’s journey into darkness. From the remote Montana wilderness of 1810 to a secret chemical weapons laboratory under the Utah desert, the scope of The Last Handful of Clover is breathtaking, and lays bare the desperate longings, universal loss, and inevitable anguish of being human.

The Last Handful of Clover is an epic story, told in three volumes, clocking in at over 516,000 words and 206 chapters (plus nine poem fragments).

The main action of the novel is set in Salt Lake City, Utah. And although the story unfolds in the reader’s contemporary time, the book is also rich with historical context and backstory that trace the origins of several key characters. These early scenes take place in May of 1810 (in the wilderness of Montana), September of 1847 (in the western Utah desert), the summer of 1857 (in Wyoming, early Salt Lake City, and in the Utah desert near what eventually becomes the town of Scipio), and scattered moments in both the 20th and 21st centuries.

Each of the three books is made up of between 60 and 85 short chapters:
Book 1 — The Hereafter
Book 2 — Gifts Both Light and Dark
Book 3 — The Stone in the Stream

In addition to regular narrative chapters, the novel includes poem fragments and journal entries written in the voice of Keith Woo (one of the primary characters). The convention in the novel is that these are “found writings,” discovered, collected, and published some years after the events of the story have concluded.

How to Read or Listen to the Novel: Tutorials

If you’re interested in supporting Mongo as an author, Patreon is the choice for you!  For just a few dollars a month, you can read and listen to the entire novel!  Click here for a step-by-step guide.

If you can’t afford to join Patreon, Wattpad will also host the entire novel, but 30 days behind Patreon.  Wattpad is ad-based, but provides a very good reading experience.  Click here for a step-by-step guide.

Sometime in the fall the whole book will be released serially as a FREE podcast.  Stay tuned here for more information.

Patreon readers will be get early access, audio chapters, and much more!
Join Mongo on Patreon!
Coming Soon!

A Guided Tour of The Hereafter